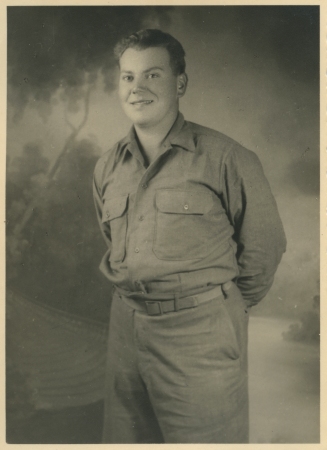 <p>My grandmother Ethel had perhaps one psychic moment in her life – the moment she saw her husband Bernie leave for the war and knew he was never coming back. Now, maybe this was not so much an actual psychic moment as it was a fantasizing about the worse-case-scenario and having it actually come true, but the fact of the matter remains that Bernie left and never came back. Had he come home, I might not be here – or would at least be a very different person – a quarter Bernie instead of a quarter Frank – but he died in the battle at Anzio Beach on February 16, 1944 and he didn’t come home.</p>
<p>Ethel was living at home with her father the entire time Bernie was overseas and she continued on living there after he was killed, leaning on her many girlfriends for support. She remained close to her mother-in-law, Rae, who she called Mother Cohen or simply “Mother” – and who probably offered her a very different and possibly more functional form of motherhood than her own mother (who had died several years before) had done. In fact, after she married my grandfather Frank and my aunt Helene was born, Mother Cohen came out to California from New Jersey to visit and help with the baby for a time. She had other grandchildren, but the bittersweetness of filling the grandmother role for a grandmotherless baby and a motherless mother when – but for a simple twist of fate – things could have been so different is something I can’t get very far in thinking about because it makes me start crying, something that thinking about Bernie always makes me do. So usually, I don’t think about Bernie too much – flipping quickly through the pages of Ethel’s photo album with his picture on them, not letting myself think too much about the impact of his death on my grandmother, on his own mother, on me – which is not a very fitting or fair memorial. That is why on this Memorial Day, I wanted to pay a kind of tribute to this man – boy, really – who could have been my grandfather (almost) and who died while he was still younger than I am now, in a bloody battle, in a place far from home. </p>