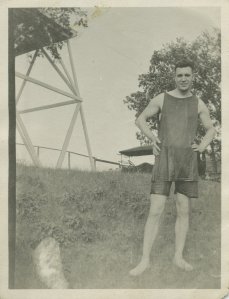 my great-grandfather charlie met my great-grandmother rona because of business. he and his brothers, in business as the cleveland wrecking company (based in minneapolis, not cleveland, at the time) bought paint or otherwise had dealings with the armstrong paint company, a business in which sam brown, rona’s father, was an important person, though i am not exactly sure what it was he did there. sam and charlie’s older brother, lou (who was, according to sources, not a very nice person), were friendly and rona found a short-term job giving elocution lessions to lou’s children upon her gradation from the school of expression in chicago. i am not sure how long she was in minneapolis – at least a couple of weeks, i guess – and in the course of her visit met charlie. when it the time came for her to return back home to chicago, charlie took her to the train station, boarded the train with her, stayed on after it left the station and proposed marriage. rona was, at the time, engaged to someone else whose name no one seems to remember, poor guy. no one remembers his name, of course, because rona broke her engagement with him and married charlie instead.

this is one of the only pictures i have of charlie as a young man where he isn’t formally posed or looking slightly awkward, and i like it because it’s casual and so human and familiar. unlike my dad and my cousin john and many other tall relations who look quite a bit like charlie, charlie didn’t attend school past the age of 11 or 12 because his family needed the income generated from his doing jobs like selling newspapers. like his brothers, like my other paternal great-grandfather harry and his brothers, a lack of formal education didn’t matter because his native intelligence and close-knit family business saw him grow up into a successful adult. this lack of schooling didn’t hamper him in other places either: he had beautiful penmanship that showed itself perhaps to best effect in the wonderfully lovely love letters he wrote to rona in their not overly frequent time apart.